I’m so excited to announce the release of Behind Bars, a story set in the same world as the Cobbler’s Soleless Son, about a widower who hates demons having to work with one when his son ends up in danger. It’s part of Less Than Three Press’s My Dearest Enemy collection, so check it out if you’re in the mood for Enemies to Lovers!

Where to purchase:
Less Than Three Press in ebook and in a print omnibus with Cobbler included  ❤ Amazon in ebook

❤ Barnes & Noble in ebook and print ❤  Bookstrand ❤ Smashwords ❤ Kobo ❤ iTunes. For sites with non-US versions (Amazon, Kobo, iTunes) it should also be available on your local version.

If you enjoyed it, please consider leaving a nice rating and/or reviewing on Goodreads! I can’t possibly overstate how much it helps new readers find my books.

Thanks, and I hope you have fun reading!

3 more days until the release of Behind Bars, the second book in the Pandemonium series! Pick it up in ebook format along with the Cobbler’s Soleless Son—or nab both together at the same time in the print omnibus, Barred Souls, now available for preorder !

To Summon Nightmares by J.K. Pendragon was pretty much everything I wanted to read when I started it a few days ago and then it just kept right on being everything I wanted at all times. I came home and rambled about it excitedly to my wife every evening (and, sometimes, texted her on my lunch break too). ((ETA: Actually fiancee! I got some questions so wanted to clarify, lol. We’ve been calling each other wife for years and sometimes I forget that not everyone knows us. Back to the review!))

It’s a paranormal story: Two boys, Jacky and Niall, are lovers. Still teenagers, they struggle with how to deal with Jacky’s abusive father and ultimately decide the best option is to summon a demon. Needless to say, the situation gets more than out of hand. Some years and a point of view shift later, we meet Cohen Brandwein, a popular author and internet vlog celebrity, who is moving to his aunt’s old house in a countryside town to try to get away from the stress of the media’s negative reaction to his coming out as trans. Little does he realize that he’s walking right into the middle of a horrifying set of serial murders, nor that the prime suspect is a hunky, self-admitted witch named Niall…

I loved both Niall and Cohen. Niall’s bravery and determination to do the right thing while agonizing over his sense of responsibility and lingering love is very tangible, but he’s kept from being a tortured love interest by both his sort of strange sense of being slightly off after everything that happened and also his blushing excitability (I was completely charmed by his being one of Cohen’s fans and trying to play off how starstruck he was). And Cohen was a delight as a point of view character. He was the perfect mix of reasonable but not gullible, clever and understandably dubious, risk-taking but with clear limits. He came to life in so many little ways—his decision to walk into town to get gas for his new car, and ending up sweaty and wheezing and Regretting yet still committed to this mission because dammit he started it was just. I feel you, dude, I feel you. It was a delight to get to read about him navigating through a mix of dealing with his family, his new neighbours, a new crush and, you know, horrible murders. And he and Niall were really sweet together.

Add to that a deeply enjoyable plot with a complex entanglement of risks and sacrifices all woven together with a really strong narrative voice, and Pendragon sold me not only on this but on picking up everything else of theirs. The only thing I found an odd choice (and even then, didn’t dislike, and it certainly doesn’t impact my rating) was having a complete point of view switch. I found myself wanting to get back into Niall’s head more, having already been there once, to get the full picture from both sides. That said, I still loved everything we got.

It’s been a few years since Pendragon wrote this, but I sincerely hope they do a sequel someday, because I will read it in a heartbeat. I want to see how Niall adjusts to his own [spoiler], and, of course, how Cohen reacts to [much bigger spoiler]. Because damn, that ending! 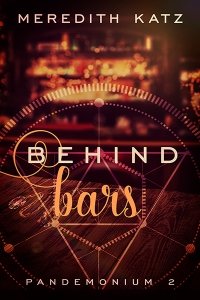 Just one more week until the release of my new book, Behind Bars!  Available for preorder in ebook edition at 15% off!  (Print edition will be available soon too, with The Cobbler’s Soleless Son included).

Letters for Lucardo by Noora Heikkilä is a graphic novel and the first of four books. The protagonist, Ed Fiedler, is a normal human, 61 years old and a scribe by trade with rather unusual employers—the Night Court, ageless royals with a taste for blood (so, yes, absolutely vampires). He has the even more unusual distinction of being courted by the handsome, eternally-33 year old Lucardo. As both grow ever closer, they have to deal with a variety of culture shocks—a human among the inhuman, a man just this side of elderly with the eternally youthful, and a tangle of mortality with and against immortality.

I loved the art and concept for this book when it first went up on kickstarter and jumped on the chance to contribute, and was so glad I did. I absolutely wish I had been able to buy in paperback, not just digital, but shipping to Canada is always a buzzkill. If there’s an omnibus of all 4 parts later? I’ll take the plunge for sure, because count me in as a new fan.

I found this work absolutely charming. It’s sweet and hot in equal measures, with a thread of potential tragedy running throughout, and a great sense of when to build drama and when to undercut it. Which is to say, it does one of my favorite things when characters are annoyed with each other, which is to get them distracted by how much they like (and are attracted to) each other.

I enjoyed that Ed’s age wasn’t treated as a barrier to sexuality in any way, either to Lucardo or to the artist. Ed comments that age wasn’t kind to his body, but Lucardo really does not give a damn. It’s drawn likewise—he’s no silver fox, and Heikkilä doesn’t shy away from the physical features that often come with aging, from sagging chins to thin ankles and everything else in between. But it’s drawn with respect and affection and acknowledgement that he’s still sexual, both to himself and others, rather than being treated as off-limits or grotesque as older bodies so often are in media. Likewise, his desire for romance, intimacy, and a lot of really enthusiastic sex isn’t either ignored or treated as abnormal. (This should probably not be so rare as to be praiseworthy, but it is. And it is so deliberately and easily handled as completely normal here!) Likewise, Heikkilä is great at character design; there’s a wide variety of characters with distinct and varied appearances (and a very multi-ethnic cast as well).

Oh, one note—this is not a book to read in public, at work, or around kids! There are a lot of graphic sex scenes and the heat index is quite high in it.

Despite the thread of potential tragedy, it doesn’t feel like it will end up a sad story. This volume covers the setup to that developing tragedy, sure, but mostly seems to illustrate the political background and players for the story to develop further in the later volumes. It’s cute, it’s funny, it’s sad, it’s visually delightful—and also, it’s a really good length, at 142 pages absolutely packed with content.

I for one can’t wait to see volume 2 announced on Kickstarter!